Perhaps you already have chronic obstructive pulmonary disease or perhaps a family member or friend has this horrible lung disease, if that is the case you already have knowledge of why people get this lung disease and why not being able to breathe properly affects your daily life so badly.

COPD is a very harmful dangerous condition, in fact males and females who smoke are twelve to thirteen times more inclined to die from Chronic obstructive pulmonary disorder than people who have never smoked in their lives.

What is the definition of COPD?

Chronic obstructive pulmonary disorder is identified by restricted airflow to the lungs usually caused by smoking or exposure to toxic gases or air particles, these invaders trigger inflammation in the lungs it gets progressively worse, in most chronic cases it can’t be reversed.

It is a preventable disease according to this study (https://www.sciencedaily.com/releases/2011/10/111013121506.htm) by the year 2020 it is expected along with chronic bronchitis and emphysema to be the third highest cause of death worldwide; the scientific community haven’t come up with any new way to treat COPD in the past 20

5 ways on how to prevent COPD

Having a healthy lifestyle can assist you to keep your lungs in a healthy state:

1.Stopping smoking must be the number one goal in reducing the risk of COPD happening to you, don’t start smoking, if you are a heavy smoker STOP NOW!

There are many choices nowadays to help you to stop smoking including Vapes and smoking cessation programs, ask your doctor for advice.

2.Second hand smoke has been shown by researchers to be a major contributing factor to the risk of contracting, in fact as reported by the WHO as many as ten percent of deaths are caused by second hand smoke, avoid second hand smoke or if you live with a smoker please ask them not to smoke in the house.

3.Family history can play a part in getting COPD, there is a genetic component (called alpha 1 antitrypsin) found in some families a deficiency that can be inherited so you don’t have to be a smoker in this case to get COPD, a simple blood test will determine if you have this gene or not.

4.Air pollution is a major cause of COPD in third world countries they use wood fires a lot for cooking the smoke from the fires trigger the lung disorder, in America the EPA advises people to check the air quality daily (www.airnow.gov) the causes of air pollution are smoke from biomass, non-ventilated stoves and dust

5.Job related exposure: people who work in mines or factories where there is a lot of mineral dust, concrete dust, grain dust, cotton dust or chemical fumes are at risk of COPD, in one study job related exposure contributed to approximately a 20% increase of COPD cases.

We now know what your risks of COPD are, so let’s talk about the indicators or symptoms of COPD

Symptoms of COPD include what sounds like a smoker’s cough, it creates a lot of mucus your breathing is difficult (specifically when exercising) you have a kind of wheeziness and tightness in your chest, you become more aware of frequent chest colds that seem to take more time to get rid of than usual, these symptoms are progressive and get worse as time goes on.

Speak to your doctor if you have the following

You are over 40 and smoke or you did smoke

You have constant COPD symptoms

You have been exposed to chemicals, dust, air pollution or second-hand smoke.

Pulmonary function test-Why it is done

Your doctor will send you to have a COPD test if:

1.You are having signs of lung disorder

2, You are frequently subjected to airborne elements in your place of work or outside.

3.Monitor the pathway of chronic lung disease like COPD or asthma.

4.You may have had surgery the test is done to test your lung capacity

A Pulmonary Function Test can help to diagnose

During a pulmonary function test forced expiry volume and forced vital capacity are measured by a diagnostic device known as a spirometer.

It will measure the volume of air that you breathe in and breathe out as well as the time it takes you to exhale effectively after taking a deep breath.

The spirometer is attached to a machine for the pulmonary function test, it records capacity measurement, to get a consistent reading, you may be requested to breathe in and out a few times.

The spirometer readings are then compared with typical measurements for somebody of your age group, the readings will determine if your airways are inhibited.

In some cases, additional tests are needed, these tests may indicate how bad the COPD is allowing your doctor to design a treatment program.

If your oxygen level is low, you may need to be assessed to see if extra oxygen would be of assistance to you. ​a pulse oximeter is used to measure your oxygen level, this is attached to your finger.

Should the symptoms seem poor or worse than normal from the spirometry test the doctor may order some more in-depth lung function tests in a hospital.

A CT scan can give more information compared to an X-ray and can be helpful in making a diagnosis of other lung diseases or finding changes to your lungs because of COPD.

If you are under 35 and this condition is in your family or you have symptoms of COPD more than likely you will have this blood test to check if you are deficient in alpha-1-antirypsin.

To check whether your heart has been impaired by COPD your doctor may send you for an ECG (electrocardiogram) or an echocardiogram.

To check if your phlegm has an infection the doctor will ask for a sample phlegm.

​So, you have had your diagnosis of COPD, what is the best treatment?

What are the best treatments COPD?

It has been proven that people who have COPD in the early stages and have given up smoking successfully with the help of tablets, gum or patches have seen a decline in the damage to their lungs and breathing, not only that by giving up smoking you will feel better in yourself.

Stopping smoking doesn’t come easy to many people, I should know because it took me many years to finally stop smoking, it actually happened after I watched a documentary on lung disease, I thought that it could happen to me, phycologically my mind switched to wanting to give them up.

Most people don’t have any difficulty but if you do a spacer may be used to deliver the medicine correctly.

The purpose of this is ​to get the medicine to assist the muscles in the airways to loosen up and relax, there are two kinds

​​These are used if the first one doesn’t work, the long acting bronchodilators works much the same, but the effect lasts longer, up to 12 hours, there are two types.

Also called corticosteroid inhalers designed to reduce inflammation in the airway, these may be used if you are experiencing flare ups even with the 12-hour inhaler a steroid inhaler may be prescribed as part of the treatment

Everything condition has a cause; if you take away the cause, and apply the science of Pulmonary Rehabilitation,your body should in normal circumstances have the ability to help repair itself with a little assistance from Serrapeptase.

This is the Mike Tawse testimonial
In 2006, Mike Tawse was confined to his wheelchair and his friends were planning his funeral. His lungs and, as a consequence, his heart, were rapidly coming to a full stop.

All the doctors could do was to add another drug to a total of 14. Luckily for him he was introduced to the plan from my book.

Within weeks he was recovering and now 10 years later he is still off those drugs. He still has Cerebral Palsy but now he has a life. He carried out my plan to the letter and made most of the diet changes.

Compare that to Margaret’s father with asbestosis. She contacted me and was very anxious for his limited life as he was sitting in his chair, strapped to an oxygen mask.

The doctors had told her that such a condition is terminal and he could only get worse. Unfortunately, like many men, he would not consider the diet change but she did persuade him to accept one step of the plan – supplementing with Serrapeptase.

“Occasionally he took two steps,” says Margaret. “Nevertheless, he discarded his oxygen mask and enjoyed getting about, going to the shops and chatting to all his friends. He was sufficiently satisfied with that and that it would extend his life…and it did.

Note:As with all enzymes or drugs results will vary for each individual.

Again, if the flare-ups persist even with a combination of the other inhalers your doctor may try theophylline tablets, these are used to relax and loosen the airway muscles and open them up.

If these pills are taken on a regular basis you will be asked for a blood sample as there may be side effects which will need to be addressed, these may include headaches and increased heart rate.

These pills or capsules make the phlegm and mucus thinner so that it is easier to get it up, particularly good for people that are experiencing a persistent cough, bad flare ups and a lot of thick phlegm. 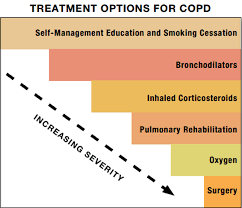 A nebuliser is used for serious cases of COPD if you find that the other inhaler devices have not worked for you. The nebuliser machine will deliver medicine through a mouthpiece/face mask.

It comes in liquid form and turns into mist which allows for it to be taken all at once. The nebuliser may or may not be suitable for you, your doctor or specialist will decide.

Should the oxygen levels in your blood stay persistently low you may need to be treated with long term oxygen therapy, this may be delivered through a nasal tube, mask or cannula.

A test called pulse oximetry will check your level of oxygen in the blood, this therapy means you will need to take it for a minimum of fifteen hours per day in your home through a tube attached to a machine, if you need to leave your home a portable oxygen tank is used.

NB these oxygen tanks are highly flammable so don’t smoke when using them.

This treatment is used again when you have a flare up it, a mask is used to push air into your lungs and helps you to breathe in an artificial way

This type of exercise programme is designed for people with chronic lung issues to help increase your lung capacity, your confidence and your mobility, it is based on activities such as walking, cycling, arm and leg strengthening exercises.

The physiotherapist and dietarians will educate you on COPD, diet and coping mechanisms in social settings, this therapy can really help you to improve the quality of your life.

Because parts of the lung don’t function anymore it may be removed by surgery, this could be an option for certain types of COPD, the statistics show that people who undergo this treatment do better for roughly 3 years, about one person in 4 doesn’t get any advantage and approximately one in 20 will die during the operation or not long after, so it is only an option for a small number of people because of the high risks involved.

8 thoughts on “Best treatments for COPD”