Fibromyalgia syndrome (FMS) is a complex, chronic pain syndrome the cardinal features of which include widespread pain, fatigue, sleep dysfunction and many other symptoms.FMS affects approximately 2% of the population with women being more frequently affected than men.

The American College of Rheumatology updated the FMS classification criterion for 2010, to assist with the diagnosis of FMS in primary care, and to recognize the importance of the non-pain symptoms, such as cognitive impairment (“fibro fog”) fatigue, and sleep disturbance, in making the diagnosis.

The requirement for patients to meet the “tender point criteria” was also removed.

Fibromyalgia is regularly misunderstood and sometimes can be very hard to diagnose, doctors sometimes are misdiagnosing this common chronic pain disorder.

Patients complain of unrelenting fatigue, feelings of anxiety and depression, sleep problems and severe muscle pain, even though a lot more is known about the condition patients can be wrongly diagnosed for FMS when they have some other condition such as Lyme’s disease, Arthritis or Chronic fatigue.

Most Doctors will prescribe drugs for Fibromyalgia, but they don’t always work. 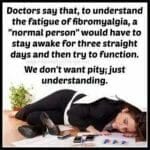 What does Fibromyalgia mean?

Fibromyalgia is sometimes difficult to describe but in simple terms if you have the condition symptoms will include chronic pain, chronic fatigue and memory loss along with a range of other symptoms.

It is a complex condition and difficult to understand, both the brain and nervous system are affected.

Fibromyalgia can sometimes be confused as a physiological condition however there is a large amount of scientific evidence to prove that FMS is a real physical condition.

There are several theories on the causes of FMS but no clear consensus or agreement, these include hormonal disturbance, physical or mental trauma, genetics and stress.

Most of the research would suggest that FMS isn’t caused by any one event but rather a combination of many emotional and physical stresses.

Some believe that the brain amplifies pain because of the way it processes pain signals, the main characteristic is widespread musculoskeletal pain, followed by fatigue, sleep disruption, mood and memory issues accompanied by a host of secondary symptoms. 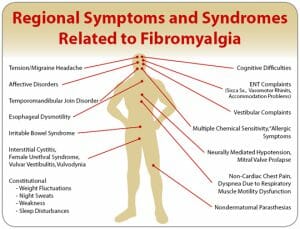 The symptoms of FMS can be triggered by normal everyday stuff which leads to pain, fear, confusion and panic attacks, even a simple thing such like the radio being turned up suddenly, different noises or conversations going on at the same time, certain smells, sudden or bright light.

Doing more than the body can cope with causes stress and this can trigger the symptoms.

It can be frustrating and confusing living with someone who has the condition when one day they can do something and the next day they are unable to so the same thing or even function properly.

People with Fibromyalgia can be on top of the world one minute and down at zero the next, it’s a bit like pulling a plug and seeing the water drain away.

The only way to cope with these episodes is to rest, FMS can attack any section of the population, someone that you know may be suffering physically, emotionally, and socially, even though they may look well.

FMS is sometimes referred to as the invisible illness because the symptoms that are found are also found in other conditions, diagnosing it isn’t as simple as doing a blood test, there is no simple test, most people who suffer go from one doctor to the next before a correct diagnosis is made.

Blood tests may come back normal, being referred to a Rheumatologist means he will complete a medical history, do a physical examination and get some X ray’s done to rule out any other conditions.

These may all come back normal but don’t worry, communication is important at this stage so keep a diary of the symptoms.

It is difficult to accept that with FMS life will never be the same again, this is a complex reaction involving a combination of factors.

On one side accepting that you have FMS means that life has changed permanently, letting go of your dreams for the future is difficult but you will have a future.

It does help a lot to talk to other people with the condition, you can express how you are feeling to them because they totally get it, they may be able to help you with a coping strategy so always look for support.

It is normal to feel enraged, frustrated and envious.

“One of the hardest things for me, my diagnosis is invisible. I was screamed at in a carpark, I’m a young mother with two children, I didn’t have my disability badge, I don’t always need my walking stick.

People that know me don’t understand that today I would be able to walk to the shops but tomorrow I may not be able to walk with my daughter to the school which is only 5 minutes from my house. By overdoing it one day I may end up in bed for days with back spasms.”

Jackie was diagnosed with FMS in 2000.

“Jackie says, this illness is devastating, our lives change both mentally and physically, from my experience I would like to offer some advice which may be helpful to people in gaining some control over this life-changing illness.

The first step on my healing journey was learning to be able to accept what I couldn’t change about this illness, I understood that Fibromyalgia symptoms in women are more common than in men even though the reasons aren’t quite clear.

I had to learn to accept what I could and what I couldn’t do, I had to learn to pace myself, to find some inner peace by slowly gaining control again. Initially I learned Reiki, an energy based self-healing therapy, within the first month I felt that it was working for me, my confidence soared, I just felt stronger.

I also turned to meditation, this has made me more aware of my body and I’m now more in tune about what my body is telling me. I try to use my mind to live in the here and now”

Is there a cure for Fibromyalgia?

The book “Improving Fibromyalgia/Chronic Fatigue in 30 Days” reveals that in most cases Fibromyalgia is made worse by lifestyle choices, to cure is a medical word, according to Robert medicine doesn’t offer a cure.

There is a cause for all diseases, if you can take that away, add a lifestyle that is non-inflammatory, and your body will have the ingredients to heal itself, by supporting tissue.
Shop Our Fibromayalgia Support Products