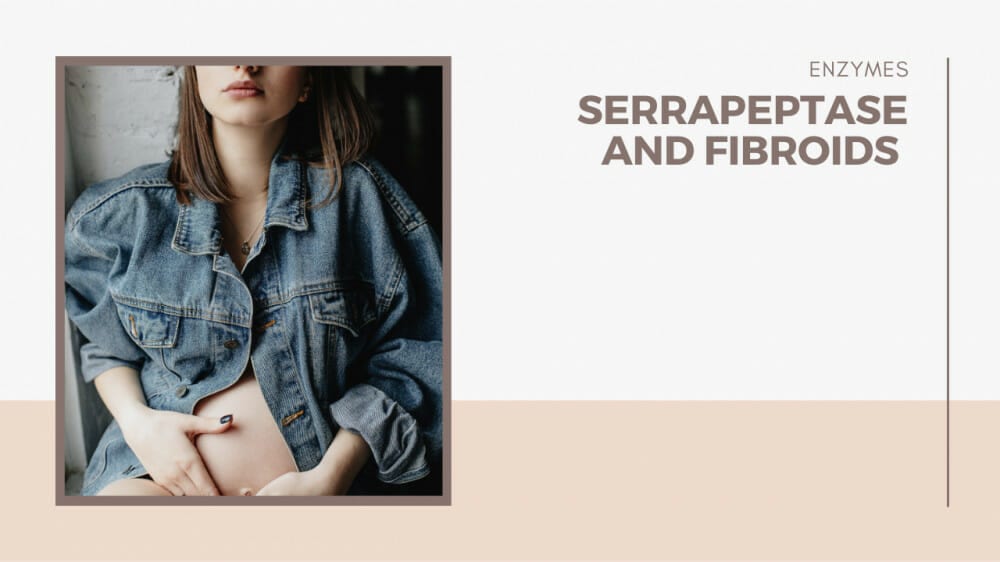 Fibroids are a muscular tumour, they grow in the uterus wall, medically known as leiomyoma (myoma) they are nearly 100% non-cancerous, fibroids may grow singly or in groups within the uterus.

Size wise they can be the size of an apple seed or in a few cases they can grow as big as a grapefruit or bigger.

One of the benefits of Serrapeptase for uterine fibroids together is the ability of this wonderful enzyme to dissolve those troublesome fibroids over a period of time.

What are the different types?

Generally, there are four types of uterine fibroids depending on the location in or on the uterus.

This type of fibroid forms on the exterior of the uterus known as the serosa, the subserosal fibroid can grow big enough making the womb look larger on one side.

These fibroids are more common than the others, they grow inside the muscular wall of the uterus to the extent that the womb may stretch.

A pedunculated fibroid is a stem that supports the subserosal tumour.

This type of tumour develops in the myometrium (middle muscle layer) of the uterus, not as common as the other three types.

Most uterine fibroids develop in the wall of the uterus, some grow on stalks that develop out from the uterus surface or they grow into the cavity of the uterus.

What are the symptoms?

Women may disagree but most fibroids don’t produce symptoms per sae, however some females with uterine fibroids may complain of these:

• Feeling full on the lower stomach

• Enlargement of the lower abdomen

• Infertility rare but it can happen

Women with fibroids are more than likely to develop issues during a pregnancy and birth, having said that the vast majority of women with uterine fibroids will have a normal pregnancy.

For those with uterine fibroids Issues during pregnancy include:

• Sonohysterogram involves water injected into the uterus to get ultrasound picture

If the above tests cannot determine if uterine fibroids are present surgery may be needed, there are two types of surgery:

1.Hysteroscopy a small scope/camera with a light on the end of scope/camera is inserted into the vagina and cervix through to the uterus, the doctor can use the camera to check for fibroids or other issues like polyps. No need for any incision.

2. Laparoscopy there is a need for incision in or close to the navel in the case of a laparoscopy, a long narrow scope is then inserted the doctor can then see the uterus to check for fibroids, if necessary, a picture will be taken.

What are the treatments?

If you have some of the above symptoms you may need to see your doctor for a regular pelvic examination that checks your uterus, vagina and ovaries, its relatively easy for the doctor to feel for fibroids during the examination he or she should be able to tell how small or how large it/they are.

A comparison is done on what size the uterus should be at that stage of pregnancy to the actual size that it is following the examination.

Where the symptoms are severe a surgery called a myomectomy is performed, the fibroids are taken away from the walls of the uterus, in a lot of cases fibroids reappear after surgery or the surgery causes painful scar tissue.

In some of the cases where there are so many fibroids the uterus may need to be removed (hysterectomy) in fact uterine fibroids are the number one reason for a hysterectomy each year in the USA.

Where does Serrapeptase come into this?

Serrapeptase is a proteolytic enzyme extracted from silkworms, one of its properties is its ability to dissolve harmful proteins like uterine fibroids, scar tissue or mucus build-up, Serrapeptase for uterine fibroids can make an uncomfortable situation into one of better health and wellbeing.

Serrapeptase can reduce inflammation, slow down the scarring process or clear chronic sinusitis. Fibroids contain low levels of a form of protein (dermatopontin) along with keloids, keloids are an overgrowth of scar tissue.

Serrapeptase when taken orally is one of the best and most effective proteolytic enzymes to break down those uncomfortable uterine fibroids into amino acids, this action triggers the healing process in the body leading to healthy wellbeing once again.

These are some comments by women who have had success with Serrapeptase and fibroids and some women who are thinking about trying Serrapeptase for uterine fibroids. 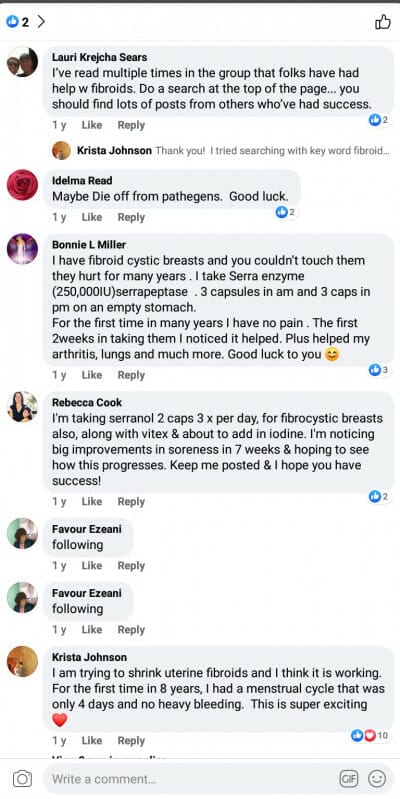 A little about Serrapeptase

Serrapeptase is one of the best enzymes for breaking protein down that is dangerous and unwanted without harming any causing any harm to the good proteins.

Enzymes are biological catalysts and proteins that speed up chemical reactions in the body enzymes are essential for life they perform so many important tasks like helping with digestion and metabolism.

Enzymes break down almost everything that goes into your mouth all the way down into your stomach into the pancreas for example fats, sugars and proteins are turned into smaller mini particles that are easily absorbed by our bodies.

Serrapeptase the enzyme works to keep inflammation at bay as well as helping with the healing process and protecting the body against harmful bacteria, that’s what makes Serrapeptase and fibroids a powerful combination.

Serrapeptase is now available as a supplement on capsule or tablet form, it is the leading enzyme proven to break up the thickest of proteins containing fibrin found in scar tissue.

As stated Serrapeptase can help with uterine fibroids, it can also help with the healing process if one becomes injured by speeding up tissue repair.

I can vouch for how good Serrapeptase is at fighting inflammation, I had a very bad pain in my hip caused by bursitis a type of inflammation after taking Serrapeptase for a few months the pain disappeared altogether, studies have shown this to be the case in patients with chronic leg swelling.

People that suffer from chronic sinus infections will know all about mucus build-up Serrapeptase may be of real benefit to break up the mucus and improve the nasal passageway.

Side effects and drug Interactions

Serrapeptase does indeed work for many conditions however you need to be aware of possible side effects and drug interactions, if you are taking medications and/or supplements then read on

If you are taking warfarin, clopidogrel or any other prescribed blood thinners don’t take Serrapeptase as well, it may cause your blood to get too thin so that it won’t clot.

Aspirin is a commonly prescribed blood thinner for the prevention of stroke, don’t mix it with Serrapeptase

Fish oil is a known anti-coagulant, it prevents blood from clotting, it is recommended not to take it with Serrapeptase

How much should you take

Serrapeptase manufacturers will offer a dosage guideline as well as different strengths, usually you will read Serrapeptase SPU, IU, Mgs, the important thing to look out for is (a) the dosage and (b) the enzymatic activity.

Depending on how acute or chronic your condition is will determine how much and what dosage you should take here is a rule of thumb;

1. Acute conditions are ones that have suddenly appeared for example an inflamed shoulder or an injury use Serrapeptase in the 40,000- 120,000 IU range

Always take Serrapeptase on an empty stomach with a glass of water, refrain from eating food fir about one hour afterwards, check your progress it will take time, my advice is to buy up to three months’ supply it usually ends up that but cheaper, give it time to work follow the manufacturer’s instructions.

I sincerely hope that you have enjoyed my post on Serrapeptase and fibroids, there is no doubt in my mind that Serrapeptase can help to remove uterine fibroids in a safe manner probably for most people without any bad side effects.