COPD or chronic obstructive pulmonary disease is the name given to a collection of lung conditions causing difficulties with breathing. These conditions include Emphysema (damage to the lungs and air sacs) and Chronic bronchitis (long term inflammation to the airways)

For smokers: Stop smoking, smoking causes COPD
Inhalers and medication-help you to breathe easier
Surgery/lung transplant: only used in a small number of cases.
Pulmonary Rehab: A tailored programme of education and exercise.

How to stop smoking:

The first question to ask yourself is: Why do you want to stop smoking? I remember trying to stop smoking myself, I tried unsuccessfully for many years before I gave cigarettes up for good.

What I found was the reason to stop smoking must be very strong in your mind to get you over the cravings for a cigarette when you feel vulnerable and want to go back smoking. We all know that by stopping smoking it is the most effective way to stop the COPD from getting worse, not only that but smoking also causes lung disease. 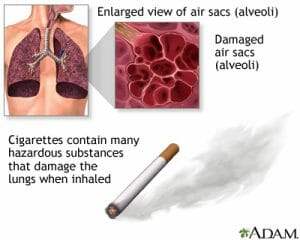 So how do you find the motivation to stop smoking, in my case I watched a movie on lung cancer, it scared me, our children were very young at the time, I wanted to be around to see them growing up, so in my mind I convinced myself that by giving up cigarettes I was going to be alive and there for my children if they needed me.

It was as simple as that. This may work for you or it may not, the cigarette cravings are the hardest thing to deal with but nowadays there are alternatives like vaping, patches, chewing gum, nasal sprays and inhalers

By giving up smoking you can prevent additional damage, however any damage to the lungs already there cannot be reversed. If you are serious about giving up smoking talk to your doctor and get advice on where the stop smoking supports are in your area.

If your breathing is affected by COPD you will be given a device called an inhaler, the inhaler contains medication to help your lungs to breathe better. There are various kinds of inhalers:

This type of inhaler can only be used to a max of 4 times a day and only if you feel out of breath. Bronchodilators can assist clearing mucus from your lungs, as a result the mucus moves more easily and can be removed by coughing.

Bronchodilator inhalers are available in two kinds; Antimuscarinic like Glycopyronium, Aclifinium and Tiotropium2. Beta 2 Agoist like formoterol, Indaceterol and Salmeterol.The newer inhalers consist of the long acting antimuscarinic and the long-acting beta 2.

After taking the long acting inhalers you still find yourself breathless or you have persistent flare ups, your doctor may prescribe a steroid inhaler as a further part of the treatment. These have a corticosteroid panacea designed to reduce inflammation in the airways, used in conjunction with an inhaler containing a long-lasting inhaler

Your doctor may prescribe pills or capsules if the inhalers aren’t controlling the symptoms. These medications such as Theophylline are usually taken two times per day to open and relax the airways. To check the amount of medication and the risk of side effects your doctor will order regular blood tests.

Everybody has a different metabolism, some more than others can manage to take medication without too many side effects but others complain of: experiencing nausea and being sick, insomnia, palpitations and headache.

If the inflammation flares up severely, your doctor may put you on steroid pills to decrease the inflammation in your windpipes. This course of steroids is usually short term 7-14 days because longer term use can lead to problematic side-effects such as:

However if a COPD consultant feels that you need steroid pills he may prescribe a low efficient dose and keep an eye on you for any potential side effects.

Pulmonary rehab is a specially designed plan of action incorporating exercise and education to assist people with lung issues like COPD.This programme can assist you to feel fitter, as a result you should be able to do a bit more before you feel breathless, not only that but it can have a positive impact on your emotional wellbeing and self-confidence.

This programme will usually involve you working in a group of people for a minimum of six weeks, typically including: A walking session, cycling and strength exercises personalised to your ability and needs, there may be some education and diet advice along with emotional and psychological support. Healthcare professionals such as nurses, physiotherapists and dietitians would provide this plan of action for you.

If you have a never-ending wheezy cough with loads of solid phlegm, the doctor may suggest you take a mucus dissolving medicine known as carbocisteine. This type of medication is designed to thin the mucus in your throat so that you can cough it up, usually taken as a capsule or tablet about 3 times a day.

A short-term course of antibiotics may be prescribed if you have symptoms of a chest infection like:
Chest tightness or pain, fever, yellow/green phlegm,rapid heartbeat, feeling disorientated or confused.

If your symptoms are severe or you have a notably bad flare up, sometimes you may need further treatment.

If inhalers haven’t reduced the symptoms, in severe cases of COPD nebulized medication may be used, a nebulizer machine will be used to transform liquid meds into a light mist, you will breathe this mist into your lungs through a face mask or mouthpiece. This nebulizer will be given to you to take at home after you are shown how to use it.

One of the complications of COPD is low levels of oxygen in the blood, it may be recommended that you have access to oxygen at home through a face mask or nasal tubes.

This will help to prevent your level of oxygen going too low, but it doesn’t treat the fundamental symptom of COPD which is breathlessness.

Long term oxygen therapy will involve you being connected to tubes feeding into a machine (16 hours a day) you will be able to get around the house, if you leave the house you will need a portable oxygen machine, do not smoke when using this increased amount of oxygen, it is highly flammable.

Should you have to be taken into a hospital with a bad flare up you may be given a treatment known as non-invasive ventilation If you’re taken to hospital because of a bad flare-up, you may have a treatment called NIV or non-invasive ventilation whereby a machine which is connected to a mask covers the face and nose and helps to boost the lungs and make it easier to breathe.

If the damage to the lungs is in a central position on the upper lobes of the lungs that person will more than likely to derive benefit from surgery. There are three main surgeries:

This is one of the two health conditions coupled together under the more defined term of COPD. The other health condition is chronic bronchitis. Emphysema triggers the sacs of air inside your lungs to burst and diminishes the   surface area of your lungs, leading to increasing difficulty breathing. The vital organs are affected by this diminished oxygen causing the tissue to be injured and eventually die.

Currently there are no cures available for Emphysema only treatments to alleviate symptoms and hinder any further damage to the lungs.

Oral treatments like Prednisone may be prescribed in addition to an inhaler, because of the inflammation antibiotics are common treatments used to stop infections that are responsible for threatening conditions such as pneumonia. A treatment known as Mucolytic agent is often used to break up mucus build up, it comes as an expectorant some popular ones are Robitussin and Mucinex and is purchased over the counter.

A lot of people with emphysema will ultimately require oxygen supplementation daily, as the disease advances the need for oxygen will increase, some people will need to take it all the time.

A large mobile container is normally used for oxygen supplementation but not everyone needs to use it, the alternative is a much lightweight portable apparatus that can separate oxygen from the air and use for supplementation, the newest models use battery power, making them more practical to use daily.

A word of caution, if used at night the battery-operated ones may not recognize that the sleeping person is inhaling.

Reducing inflammation and mucus build-up is the key to helping people with COPD/Emphysema, MSM or Sulphur has been found to help in decreasing these two symptoms. CQ10 (Coenzyme Q10) present in whole grains and fish contains some anti-oxidant characteristics, however there are no studies to link CQ10 to favourable COPD/Emphysema treatment.

Herbs such as ginkgo biloba are acknowledged for its numerous health advantages, it could strengthen the lungs, grape seed extract is thought to safeguard people who smoke from any further damage to the lungs. 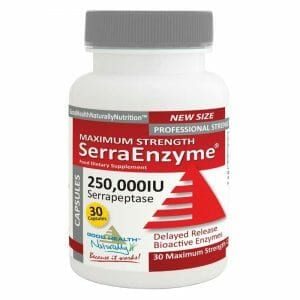 Serrapeptase has been used successfully for over 35 years because of its unique ability to dissolve mucus build up and get rid of inflammation. Serrapeptase can be taken in conjunction with other medication, the dosage will depend on how bad the symptoms of COPD Emphysema are.

For people taking oxygen each day, it is recommended to take two 250,000 IU Serrapeptase with water on an empty stomach.

This video was put together by a gentleman Stephen L Crossley he is in his seventies and has suffered from chronic COPD for a number of years, he has used Serrapeptase and according to the video it has worked amazingly well for him. You can read more about Serrapeptase just click here.

Herbs may interfere with medications that you take in the sense that they may cause complications making your meds less effective,always speak to your doctor first, give him the information before you make the decision to start a new therapy.